History of Shanahan’s Barn in Charlevoix, Michigan
1909 The Waller Farm is Established:   In September of 1909 the contractor Alex Cameron commenced the construction of a residence and farm for Mr. Edward C. Waller and his wife, from Chicago.  Mr. Waller was also a prominent member of the Chicago Club of Charlevoix.  He came from one of the oldest families in Chicago and gained his fortune through real estate. His company developed the Home Insurance Company building, a forerunner of the modern skyscraper. The Wallers had 6 children.

Ironically, Edward Waller co-founded the Charlevoix Golf Club in 1896, part of The Chicago Club. In 1937 it was sold to the City of Charlevoix for $1.

The Initial Farm:  The Orchard Bay Farm, which was commonly known as the Waller Farm, initially encompassed 225 acres. It including the sheltered slopes of Mt. Mc Sauba, the shore of Lake Michigan, and cedar swamps. At the time of purchase the land was scrub brush and half burned trees that had been harvested for the lumber trade. Mr. Waller cleared the brush and removed stumps. He drove wells in several spots and fenced the perimeter of the property. By 1915 he had 350 acres of land under plow, 80 acres of which were filled with 4,000 apple trees. The trees harvested 100 bushels of hand-picked apples annually. 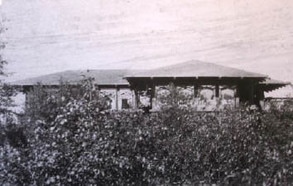 At Lake Michigan’s shore the Wallers built a bungalow where they often spent their afternoons and evenings entertaining friends.

​The Charlevoix newspaper, The Sentinel, described the farm as “magnificent barns, with every modern appliance, are grouped beyond the commodious farm house, and every square foot of the demesne is a scrupulously clean as any Charlevoix lawn.”
​
Frank Lloyd Wright Pavilion:  In 1909 Mr. Waller commissioned his friend, Frank Lloyd Wright to build a swimming pavilion on his property. The bathing pavilion was situated on a dune with views of Lake Michigan. It was a single-story structure of board-and-batten construction and featured a generous terrace and living room with a large fireplace for entertaining. It was located at 12615 Pa Ba Shan Lane. It burned in either 1922 or 1923.     The Model Dairy: Upon forming the farm Mr. Waller purchased his first heard of 7 thoroughbred dairy cattle from the Northern Michigan Asylum in Traverse City.  Although that may seem odd, during that time the Asylum (later called the Traverse City State Hospital) was home to a heard of prize winning dairy cattle, including a world champion milk cow, Traverse Colantha Walker.

By 1928 the Waller herd had grown and was famous for its quality. The dairy herd were pure bread Holstein dairy cows that were registered with the HolsteinFriesland Association of America and given a special registered name of “Siloam” as a part of each cows registered name.

The Farm Grows and then Subdivides:  By 1912 the Farm included 1600 acres of land with two miles of lakefront on Lake Michigan. The farm was known as a model farm and renowned throughout Michigan.

Around 1912 an extensive survey of the land was begun with the intention of dividing up about 700 acres into 40 acre lots. The Waller family envisioned a colony of smaller farms and a neighboring resort to be built on the land.

Reforestation Project:  In 1915 the farm was being co-managed by Mr. Mather a graduate of Michigan Agricultural College (MSU) and Mr. Beers a graduate of Illinois Agricultural College.  At that time the farm consisted of 40 well bread cows, 20 horses, 250 sheep, chickens and hogs.  Under their management they accomplished a reforestation project including 80,000 white pine and Norway pine seedlings, along with 200 butternut and walnut seedlings.

Mr. Waller Dies: Mr. Edward C. Waller died in 1931. By that time Orchard Bay Farms had grown to 3,600 acres with 5 miles of frontage on Lake Michigan.  At the time of his death Mr. Waller left an estate worth 4.5 Million Dollars.

​In 1942 Mr. Robert Allen purchased the farm from the Waller estate.  He raised a herd of white-faced Herford cattle and renamed the farm Birchwood Ranch. Mr. Allen gave 80 acres of the land to the Charlevoix Rod and Gun Club.
​

At the time of purchase the farm was 2,000 acres.  At the time the property included 5 homes in the central section, one of which the Shanahan’s occupied, another where the caretaker Mr. and Mrs. Harry Elzinga lived and the others were rented.

The large barn was approximately 180 feet long, it also had a smaller barn, a chicken house, a milk house, a sugar house and other small farm buildings.  800 acres of land had been cleared and 450 acres were under cultivation.  The remaining land was wooded and included the pine that had been reforested during the Waller era.

During their ownership 14 train car loads of rock were removed from the land and shipped to St. Louis, Missouri where they were used to stone-veneer the boyhood home of Ulysses S. Grant which is owned by Anheuser-Busch Company.
Mr. Shanahan died in 1990. His wife in 1999. Members of the Shanahan Family still reside in Charlevoix to this day.

The property on which the barn stands (as well as thousands of additional acres) were purchased by Rik Lobenherz & the original founders of the Charlevoix Country Club over 25 years ago to develop not only the beautiful golf course & clubhouse but all of the surrounding neighborhoods in the Country Club. The Barn sits near the 16th hole of Heatherwoods Golf Course at Charlevoix Country Club.

Shanahan Barn Restoration
Charlevoix Country Club was purchased by tire magnate Fred Taylor (who also owns Sommerset Pointe Yacht Club in Boyne City) in March of 2012. Mr. Taylor immediately commenced on a top to bottom face-lift on the clubhouse, new construction of the fitness center, and a revitalization of Shanahan’s Barn with a vision of holding weddings and events in this charming albeit massive venue.

The restoration work was done using the original craftsmanship practices.  The cathedral trusses were assembled with wooden dowels. Other historic barns from the area were sourced to provide the additional barn wood it took to maintain the barn wood aesthetic once the restoration process took place. The cement floors were poured in September of 2013 and have begun the patina process which involves a mixture of acid washing and staining to create a weathered effect.
​